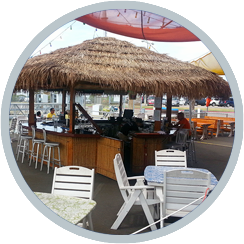 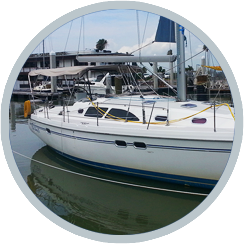 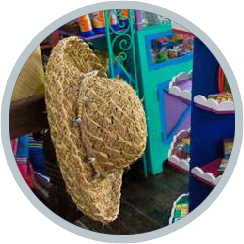 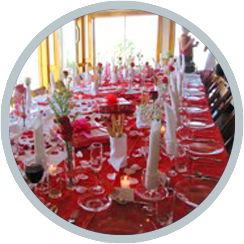 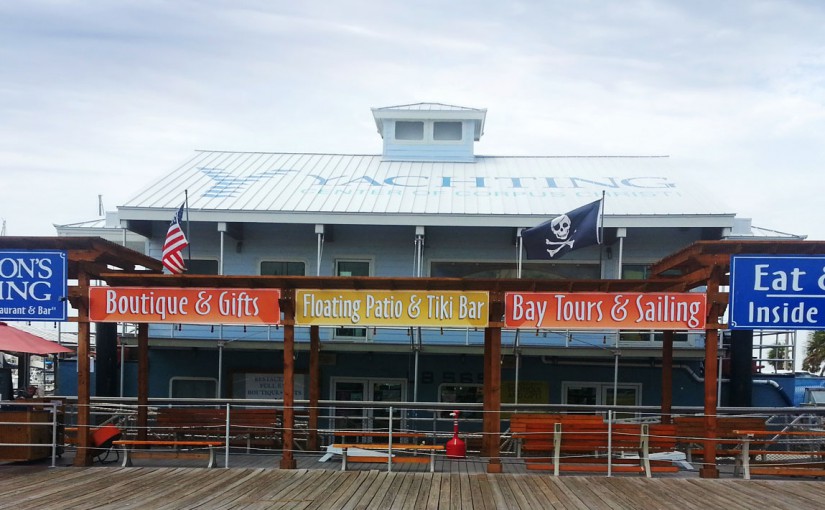 All seating is on first-come, first-served basis.  We do not accept reservations, and appreciate your understanding.

Masks are optional for staff and guests. We will continue to monitor the trend of new cases and vaccination administration, and will consider revising our policy if a substantial spike in cases occurs.  Thank you for your understanding.

Note:  Our kitchen typically closes at the time listed above with the bar remaining open for an hour or so. However, both the kitchen and bar will remain open past the posted hours if business warrants.

Harrison’s Landing, a dba of Yachting Center of Corpus Christi, LLC, is a family-owned and –operated business, comprised of three areas of services:  Tavern on the Bay, Cathy’s Boutique & Gifts, and the Yachting Center.

The Yachting Center was opened in 2006 at its former location on the Cooper’s Alley L-Head, at the other end of the City Marina, as a sailing school, captain’s training and charter boat operation.  By 2007, the operation had grown and a new, larger location was needed.   A retired Army utility lash barge was purchased and modified to accommodate the existing two-story floating building.   We relocated to our new location in April 2009, and expanded our operation to include Cathy’s Boutique & Gifts.

The following year we opened Tavern on the Bay, an outdoor patio restaurant, serving a limited menu of hamburgers, hot dogs, pulled pork sandwiches and fried shrimp baskets.  The Tavern has since expanded several times from the original hamburger stand to the current day full service indoor/outdoor restaurant, with a second dining area for overflow dining and private banquet room for events. Live entertainment is offered seasonally on the back dock, usually Wednesday through Sunday.

In 2010 we purchased a 50’ open touring boat to offer one-hour boat tours of Corpus Christi Bay.  She was named Japonica after a touring boat that operated from Pleasure Pier in the early 1930s before the seawall and the T-Heads were built in the City Marina.  Japonica is a favorite tourist attraction with its BYOB cruises, dolphin sightings, and a water view of the Bayfront, Harbor Bridge, Texas State Aquarium and USS Lexington. All ages enjoy a ride aboard Japonica, especially the sunset tours.

Cathy’s Boutique & Gifts began as what was supposed to be a “ship’s store,” but quickly was redirected to a tourist gift shop and convenient spot for marina tenants to obtain ice and soft drinks. Within a year, demand for more than just refrigerator magnets and Corpus Christi trinkets caused the gift shop to turn toward a more boutique retail environment.  Cathy’s Boutique boasts an eclectic inventory of “all things coastal,” offering home décor, wall art, jewelry, fashion accessories, men’s and women’s apparel, and, of course, Corpus Christi souvenirs, although we try to offer items other than the typical ones found at the local souvenir shops across the Harbor Bridge or on Padre Island.

Nell Betty II our 38’ sailing yacht is available for captain charters from two to eight hours, as well as over-night charters.  There is nothing as relaxing as a sailboat cruise in the warmth of the afternoon sun, or at sunrise or sunset.   The gentle caress of the waves lapping against the hull, the scent of sea air, and the serenade of the sea gulls is unmatched.  Sharing that with your significant other, family or friends is a memorable experience.  We offer these cruises as public or private, with a maximum of six passengers.

In 2011, we changed our name from Yachting Center to Harrison’s Landing to better reflect the multi-service facility we had become.  As we grew in popularity, our second floor view of the bay and cityscape became recognized as a perfect private rental facility.  In addition to the upstairs room accommodating our overflow and/or indoor dining needs, it also has become a popular place for wedding rehearsal dinners, graduation and birthday parties, meeting space, etc. We also host our special holiday events, and quarterly “Beer School” events in this space.

With the Spring of 2012 came the addition of the “Back Dock Tiki Bar” and two other floating decks, which were an over-whelming success.  These areas  labeled us as an outdoor destination, especially after the City adopted a “dog” ordinance allowing canines in compliant areas of outdoor restaurants.  Furry friends are welcome on our back patio as long as they are wearing current city license and rabies vaccine tags and remain on a leash while on our property.  Water bowls happily provided.

Our popular, beloved tiki bar and one of the two other floating patios were destroyed by Hurricane Harvey in August 2017.  We will have them rebuilt and in operation by the late summer/early fall of 2019.

If you are interested in a hands-on experience we offer “Intro to Sailing” an interactive cruise, where you serve as the crew and are instructed in basic sailing techniques as well as its unique terminology.  “Intro to Sailing” is the perfect outing for a family vacation excursion, a guys or girls day out, father & son outing, or just a group of friends wanting to do something different.  It definitely is a stay-cation idea waiting to happen!

We also offer a dinner cruise package with dinner at Tavern on the Bay and a 2-hour sail aboard Nell Betty.  This has become a very popular activity for locals and tourists alike, and always BYOB, with advance reservations required.

In 2017 we added “Texas Tease” to our fleet.  She is a 74′ double-deck boat with a full bar offered on the open upper deck.  A Sunday Brunch buffet is available weekly at 10:30am combined with a 1.5 hour cruise.  This boat offers primarily evenings cruises during the summer (closed Mon, Tues & Wed) and Sunday brunch and Sunday afternoon cruises.

Tickets for all of the boats can be purchased on line at https://harrisonslanding.net/boating/, or by calling the boutique at 361-881-8503 ext 2, or in person at the boutique.

Harrison’s Landing is committed to living out its mission statement: “At Harrison’s Landing, whether dining, boating or shopping, we strive to delight our guests with such an exceptional experience, they can’t wait to spread the word and come back again!”

We haven’t finished evolving yet, stay tuned for what’s around the next corner.

Harrison’s Landing, where the best of Corpus Christi comes together!

At Harrison’s Landing, whether dining, boating or shopping,
we strive to delight our guests with such an exceptional experience,
they can’t wait to spread the word and come back again!

Why Harrison’s Landing you ask?

Berkeley Plantation on the James River usually appeared on Civil War maps as Harrison’s Landing.  Settled in 1619 – a year before the Mayflower left England – Berkeley was acquired by  Benjamin Harrison II in 1691.

By 1776 and the 2nd Continental Congress, Gen. George Washington had assumed control of the Continental Army, Peyton Randolph had died and had been replaced by John Hancock, and Benjamin Harrison V joined 55 other patriots in signing the Declaration of Independence.

In 1781 the traitor Benedict Arnold pillaged Berkeley as a way to hurt a signer of the Declaration  and close friend of George Washington, the man he had betrayed.  Arnold recognized the sensitive points of Virginia aristocrats. He removed all the ancestral portraits of the Harrisons from the walls and placed them on a bonfire in front of the mansion.  That not only hurt the Signer’s family – for the Virginia planters spent heavily on artists to preserve their likenesses into earthly immortality – but also future historians seeking portraits of the Harrisons.

In 1840, the Signer’s son Gen. William Henry Harrison (6th generation), was elected the 9th President of the United States.

In 1862, During the Civil War, 140,000 Union troops occupied Harrison’s Landing.  President Abraham Lincoln twice visited there to confer with General George B. McClellan about his lack of prosecution of the War.  It was during this 1862 occupation at Harrison’s Landing that the haunting bugle call “Taps” was composed and first played.

In 1888, William Henry’s grandson, another Benjamin Harrison (8th generation), was elected the 23rd president of the United States.